[Today's post marks something new from Birdland West.  I want, from time to time, to post experiments in fictional technique, short stories or sketches that attempt to bring more of the non-human world into fictional forms.  At this moment, this all experiment and feeling my way forward in the dark.  I hope that readers will offer feedback and ideas in response.]

The hummingbird hung motionless, except for its furious wings, above the feeder.  The red plastic -- a human would have called it red -- glowed like a beacon in the bird's vision, reflecting parts of the spectrum no mammal could see.  Light glinted off the bird's feathers which broke it apart like millions of tiny prisms, throwing flashes of green and red.  (Again, green and red as humans would see them -- with their primate color vision, recently recovered in evolutionary time, and so limited as compared to the bird's).  The hummingbird poised above the feeder.

Almost no one noticed.  The writer -- who lived in the house attached to the yard where the feeder hung -- was uncommonly aware of the sounds of the bird's presence -- the high pitched, fast sound, like a telegraph key -- but the weather was growing cold and the doors and windows of his house were shut.  Besides, he was preoccupied with work (or with the distractions that kept him from working).  And he was thinking about a young woman he had recently become interested in and what seemed like the impossibility that she could be interested in (old, fat, unsuccessful) him.  He didn't hear the hummingbird's approach or sense it hovering over the feeder in the bush at the front of the yard. 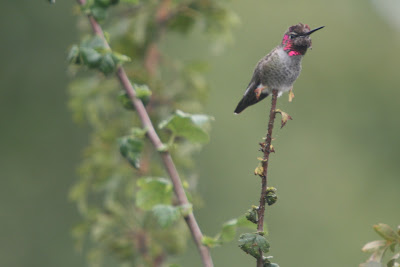 Across the street, a woman had just come out of her split-level home, carrying her son in her arms.  He had just turned a year old and was large for his age, with a thick tassel of very dark hair and dark eyes.  His mother looked as if she could barely hold him.  She was from China, but spoke English with only the barest trace of an accent, having lived in Europe for years before the US.  The writer, who was probably old enough to be her father, thought she was beautiful.  Her son was moody, and sometimes when he cried she would bring him across the street to the sidewalk outside the writer's house to look at the writer's dogs -- especially the huge St. Bernard mix puppy who liked to hang out on the front deck in all kinds of weather.  He was oblivious to cold or rain or snow.  Children loved him, with his goofy face and harlequin colors.  He would stand up on his hand legs and put his paws on the rail and the little boy's fussing would turn to laughter.  He would point and laugh.  The funny dog was too big and rambunctious to play with small children though.  Ironically it was the older dog, a female pit bull two thirds the size of the clown dog -- the type of dog that some people crossed the street to avoid -- who was really good with children.  She understood that they were like puppies.

The little girl who lived three houses down also loved the dogs.  She was a few months older than the boy, much smaller, but already walking.  Running.  Her mother -- tall, slim and unselfconsciously lovely -- was always chasing her up and down the sidewalk.  They were a Mormon family, the mother and father had met at Brigham Young University, moved here because of his work, and were renting a house on the block until they could find one of their own to buy.  The little girl was fearless.  She would run down the sidewalk, and back down the stairs into people's yards.  Once, she had started climbing the steps to the writer's deck with the clown-dog, who outweighed her by three times or more -- at the top of the stairs, behind the gate barking.  Whenever she saw the dogs she would point and squeal.  Her mother believed her first word had been "dog".
But today the sky was gray and the mood was drizzly.  The writer's door was closed and the dog's were inside.  The mother, struggling with her son's weight, sighed and headed off down the sidewalk, hoping a little more walking would ease his mood.
She didn't see the hummingbird.
In the cherry tree, which grew in a neighbor's yard but overhung the writer's yard, chickadees were queuing up to take their turn at the brass feeder which swung from one of the lower branches.  They leapt from branch to branch, their sharp black and white markings standing out when they landed in the light.  Chicka-dee-dee.   Chicka-dee-dee. Their call had a wheezy sound and the writer often whistled, absently, a rough approximation of the tune.  Nothing any chickadee would recognize.  The little birds seemed almost fearless, and they would sit on the feeder and look into the eyes of a person standing on the stairs only a few feet away.  They could, with a little patience, have been coaxed into eating out of the writer's hand.  They would even scavenge seed off the boards of the deck while the clown dog lay close by, watching.  They were smart enough not to try that with the older dog.
Suddenly, a young grey squirrel raced up the trunk and out along one of the branches.  Chickadees, startled by the sudden movement, dived upwards into the air.  The squirrel leapt heavily off the swaying branch and landed on the rail of the porch, where seed had been scattered (by the writer) for the pigeons and other birds, like the Juncos who preferred to eat off the ground or rail instead of a feeder.  Just as often, though, it was the squirrels who ate it, or one of the rats that lived in burrows underneath the fence.
Inside the house, the clown-dog, whose hearing was acute, jumped on the couch beneath the window and bayed.  The blinds were down, so he couldn't see out, but his eyesight was not so good anyway.  His ears never failed.  The older dog's head bobbed up out of sleep at the sound of the baying.  She jumped up on the couch beside him.  Even with her front feet on the back of the couch, standing nearly erect, she wasn't as tall as the clown dog sitting on his rump.  Her three short, hoarse barks counterpointed his bay.
On the rail, the squirrel pivoted, changed directions almost as if he had turned himself inside out.  His busy tail sprang upward and he reversed his leap, catching the thin branch -- which dipped precariously under his weight -- and hugging it with all four paws.  He flowed rapidly along the branch and down the trunk, disappearing into the neighbor's yard.
After a moment the dogs fell silent, but the clown-dog kept his ears cocked.  Somewhere down the block, the little boy was crying.
The hummingbird, all but unseen, alighted on the perch of the feeder and drank.


###
If you like Birdland West, you might also want to check out our sister blog Books and Beasts, which focuses on reviews of books about animals and related topics.
I have also begun writing regular Sunday morning posts for SoDo Mojo, a Seattle Mariner's blog.  Check out my most recent post, Change of Season.
Many of the original photographs featured on Birdland West are available for sale as art quality prints.  You can check out all of our offerings at http://AlexWashoe.imagekind.com.  If you see an image here that does not show up on our Imagekind site please contact me directly and I'll let you know about availability.)
Posted by Alex Washoe at 7:15 AM